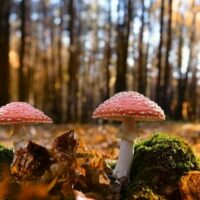 Almost everyone has seen an artistic depiction of an Amanita muscaria mushroom.  Its tall stalk and bright red cap with white spots and white gills look like something straight out of folklore or an artist’s imagination.  Children of the 1980s watched Mario and Luigi gain superpowers by eating these fungi in the Super Mario Brothers games.  The previous generation watched Saturday morning cartoons where bright blue Smurfs cavorted among bright red mushrooms.  Your grandparents probably saw paintings of the mushrooms in the illustrations of Beatrix Potter’s books.  Seeing one of these pulchritudinous fungi in real life is truly an experience, and by some accounts, ingesting one is an even more memorable experience.  Some species of Amanita mushrooms, including the ruby-hued A. muscaria, have hallucinogenic or entheogenic properties, and laws on these mushrooms are changing rapidly, even as medical researchers investigate their applications in the treatment of addiction and mental illness.  If you are facing criminal charges for illegal possession of fancy fungi, contact a Florida drug offense attorney.

Where the Mushrooms Are Magical, but Not Exactly Magic Mushrooms

Ever since it opened in 2018, Chillum Mushrooms and Hemp in Ybor City has been celebrating Florida law’s increasing openness to items of nature’s produce that were once considered dangerous illegal drugs.  As an increasing number of cannabis products have become eligible for legal sale in Florida, Chillum’s proprietor Carlos Hermida has added them to the shop’s menu.  Last month, he started offering A. muscaria mushrooms.

By contrast, Psilocybin mushrooms, typically branded as “magic” mushrooms in recreational and experimental use, are a Schedule I controlled substance according to federal law.  If you buy entheogenic mushrooms on the street or on the Internet, or if you receive them as a gift, you can never be sure what species of mushroom you are buying.  Until other businesses like Chillum follow suit and there is a widespread legal entheogenic mushroom industry, there is always a chance that the mushrooms you are eating are more poisonous or more illegal than you think.  A criminal defense lawyer can help you with problems that involve legally ambiguous fungi.

A Central Florida criminal defense lawyer can help you if you are being accused of illegal possession of entheogenic substances such as psilocybin mushrooms.  Contact FL Drug Defense Group in Orlando, Florida to discuss your case.