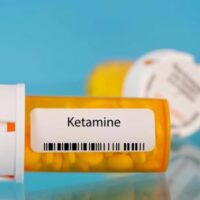 In certain medical contexts, ketamine is the least dangerous drug.  It induces a dissociative, dreamlike mental state and relieves pain and anxiety, but it does not suppress breathing or reduce blood pressure.  If you have ever woken up during surgery (a lot of people have), you probably don’t remember it, because of ketamine.  In field hospitals in combat zones, ketamine is sometimes the only drug given for surgery after traumatic injuries where it would be dangerous to suppress the patient’s breathing and heart rate.  Administering ketamine as a treatment for clinical depression is not yet a mainstream treatment, but it has attracted the interest of researchers, as have entheogens and other substances that gained popularity as recreational drugs before the medical establishment began serious investigation of their clinical potential.  Ketamine is a Schedule III controlled substance, and while it is widely available for recreational use, possession of it can carry serious criminal penalties.  If you are facing criminal charges for possession of ketamine or another controlled substance, contact a Florida drug offense attorney.

Ketamine Chic and Other Bogus Stereotypes

In a recent article on the Dazed website, Daniel Rodgers proposes the Minions from the Despicable Me film series as a symbol of the current generation of recreational ketamine users.  He cites the fact that clothing bearing images of the Minions is popular among wearers of the so-called “ketamine chic” clothing style, and he compares the gibberish of the Minions to the incoherent speech of people under the influence of ketamine.  Much of the rest of the article is a litany of clothing items associated with the ketamine chic look, everything from wraparound sunglasses to Patrick Star pajamas and a series of quotes from social media personalities known to dress in the ketamine chic style, mostly about the absurdity of fashion and of life.

Life might be absurd, and the clothes associated with the ketamine chic aesthetic might be delightfully silly, but if a police officer pulls you over because you have a broken taillight or didn’t notice a “no U-turn” sign on a road where you have never driven before, and then decides that, because you have a Minion stuffed toy on your dashboard, there must be drugs in your car, it is no laughing matter.  Searches and arrests based on stereotypes of what people who commit certain crimes supposedly look like are unfair, and a jury should not convict you, and perhaps the judge should even drop the charges, if the police only searched your car because they thought you looked like a drug user.  Minions are not drug paraphernalia, and you should not plead guilty because of profiling.

A Central Florida criminal defense lawyer can help you if you are facing charges for illegal possession of ketamine or another controlled substance.  Contact FL Drug Defense Group in Orlando, Florida to discuss your case.