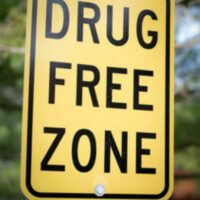 In criminal cases involving drug offenses, many details affect the outcome of the case.  Was the drug in question a Schedule I controlled substance, a Schedule V controlled substance, or somewhere in the middle?  How large a quantity of the drug was present?  Does the defendant have any other convictions on his or her record, and if so, what offenses are they for?  Which other items were present at the site where the police found the drugs?  Drug paraphernalia like rolling papers or spoons make things a little but worse, but firearms and large sums of cash make things a lot worse.  Were children present?  A little bag of white powder or a bottle of prescription pills not prescribed to you will cause much more severe legal problems if the drugs were in the proximity of a child, such as if police found the drugs during a traffic stop when your minor child was in the car with you, or it is only by chance that children were not present, such as if the arrest took place at a public park.  No matter where you were when the drug crimes allegations arose, you should hire a Florida drug offense attorney to represent you in your case.

If it is against the law to possess controlled substances, except in cases where a doctor has prescribed them to you, then isn’t drug possession equally illegal wherever you are?  Not exactly.  First, there is the issue of cannabis.  Federal law considers cannabis a Schedule I controlled substance, and possession of cannabis is still illegal at the state level in Florida, but there are some exceptions.  It is legal to possess small quantities of cannabis if you have a medical cannabis card, and some cities and counties have classified possession of small quantities of cannabis as a civil infraction instead of a misdemeanor or felony.

Then, there is the issue of drug-free zones.  If you are caught in possession of any quantity of drugs in a drug-free zone, the penalties are more severe; this is true regardless of the drug crime of which you are accused, whether it is simple possession, possession with intent to deliver, drug trafficking, or any other crime.  Florida law defines a drug-free zone as all of the following places, plus a 1,000-foot radius around them:

If you commit a drug offense in a drug-free zone, the severity of the offense increases by one grade, for example, increasing from a third-degree felony to a second-degree felony.

A Central Florida criminal defense lawyer can help you if you are facing charges for a drug offense that allegedly took place near a school or in another drug-free zone.  Contact FL Drug Defense Group in Orlando, Florida to discuss your case.

By FL Drug Defense Group | Posted on September 2, 2022
« Beware Of Xylazine: The Medical Consequences Are Worse Than The Legal Ones
Anabolic Steroid Laws In Florida »